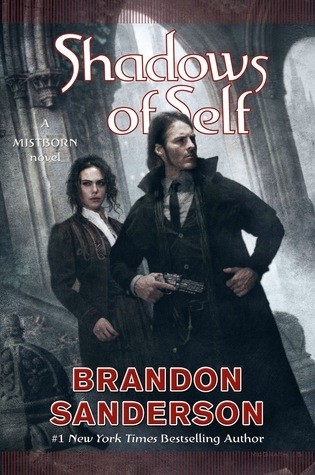 Ask any of my friends at college, and they will tell you I’m a huge Brandon Sanderson fan. The Mistborn Trilogy is my favorite set of books, and I’ve read all of his novels (except, that is, for the Stormlight Archives, a sin I soon hope to redeem). That

First, it’s good to note what it is that makes Sanderson’s book so engaging. His worlds are imaginative, his magic systems are well thought out and developed, his characters are fantastic, and he incorporates a good amount of humor into his dark environments.

So how does Shadows of Self hold up? When comes to his world, it’s still the same world from the Mistborn trilogy. Other reviewers have commented on how well he evolved the world from the original trilogy when the preceding novel in this series, Alloy of Law, came out

(Review by Joshua S Hill and Koen Peters here). He still continues to evolve and reveals new things about the kandra that we never knew about before. We’ve gotten tastes of their potential in the third book, Hero of Ages, but now we get to see them doing all these crazy things, including a kandra who has the potential to use both allomancy and feruchemy.

All the characters from Alloy of Law return as well. Wax and Wayne are still doing their freelance law enforcing and they’re still just as fun as ever. Wayne is still a lot of fun, and it’s especially fun to see how the world works from his point of view. But at the same time, it’s great that we can see more of his human side, even when the methods of exploring it are rather goofy. Sanderson also gives time to develop some characters who typically exist just to fulfill a role. Steris, the ditzy noble girl from the last book, is given more development and we come to understand her and her own struggles.

If I had one gripe with the book itself, I would have to say the situation felt a bit rushed. Without giving too much away, the novel takes place over the course of a few days. Because of this, some of the elements of the conflict seem to escalate faster than what I would conceive as possible, especially given the amount of time we had.

As for the ending… my lord that ending. Again, I can’t say more without giving anything away, but Sanderson really knows how to land the plane. All in all, it may not be his best work, but it’s an engaging read and a good continuation of a well-loved fantasy world.

Here’s the Amazon page for Shadows of Self if you’re interested in picking it up. here.

If you want to support the writer directly, check out Brandon Sanderson’s store here.

A Writer's Mind Is A Scary Place

the Writings and Ramblings of Wil Sterling

Only when you turn off the lights can you see the shadow within your own eyes.

Promoting authors who capture the hearts and minds of their readers

Taming of the Muse

Where I try to talk about writing things

Eggshell in the Story

there's nothing new under the sun, unless its covered in yolk

Let me be your guide on your journey to publication

the World of Relationships from a Quiet Observer

Amateur theology all week long. But especially on Mondays.